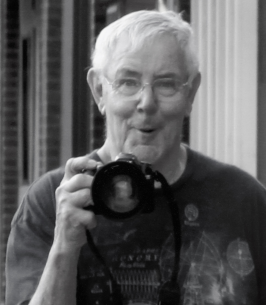 Vernon L. (Vern) Barber, Jr. of Altoona passed on Thursday, August 11 during hospice in Meadowbrook at Bloomer at the age of 90.

Vern was born in Evanston, IL on April 21, 1932 to Vernon L. Barber, Sr. and Laura Long (nee Leach) Barber. His family moved to Racine, WI when he was four years old after living for a short time on Lake Okoboji in Spirit Lake, IA. Vern graduated from Washington Park High School in 1950 and married Karen Balthazar (who sat next to him in homeroom) on October 24, 1953 at Holy Communion Lutheran Church in Racine.

Vern was involved in the paint industry his entire career, starting work at his father’s paint store and then becoming a sales representative for the Glidden Paint Company, covering a sales territory throughout southern Wisconsin and Illinois. He and Karen moved to Rockford, IL in 1959 but returned to Racine four years later where Vern began developing and manufacturing house paints under his West Paint label. He and Karen continued to own and operate the paint factory and stores until retirement. Vern also owned the Wharf Boat Yard in Racine with Gary Knop, where their customers became his friends.

Vern was a man of many talents, but especially loved sailing on Lake Michigan, tinkering with machines, photography, and working with wood, making all types of furniture and woodcraft. He and Karen built their first house near Franksville from plans in a book, and he continued to make various home improvements in succeeding homes in Racine, North Port (Florida), Stone Lake, and Altoona.

Vern was active in various community groups throughout his life, including the Racine Yacht Club where he served as commodore, and Racine Power Squadron teaching boating skills and safety. Vern helped with formation of the Racine County Water Patrol, was appointed to the State Waterways Commission where he helped design harbors and boat launches, and was a member of the local photo clubs in Altoona and Florida. Vern enjoyed sharing his photography knowledge with adults and youth alike, and served as a photography judge in many local county fairs. Vern worked part-time as a photographer for the former Altoona Observer newspaper and as a free-lance photographer.

Vern is survived by his wife Karen, daughter Peggy (William) Schwengel of Eau Claire; grandsons Benjamin (Laura) Schwengel of Lino Lakes, MN, and Michael Schwengel of Eau Claire, and granddaughter Laura (Brad) Kahler of Colome, SD; and five great-grandchildren, Adelaide and Hendrick (Hank) Schwengel, Armin, Leokadia (Leah), and Luella Kahler. He is also survived by his brother, John, of Chicago, IL and his niece, Jeni Young, of College Station, TX, as well as many friends, including his breakfast group at the Altoona Family Restaurant. He was preceded in death by an infant daughter, Patricia. Vern’s greatest joys were in spending time with his family where he taught them how to remodel houses and build and repair things.

Private services with the family are planned with burial at the Tyndall Cemetery, Tyndall SD at a later date. The Cremation Society of Wisconsin, Altoona is assisting the family with arrangements.

The family would like to express their appreciation to the caring staff of Mayo Hospital - Eau Claire and Meadowbrook at Bloomer.