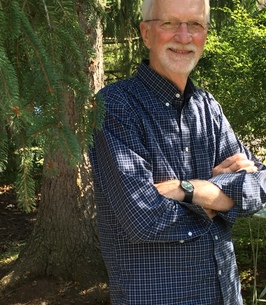 The world lost one of its kindest and most creative souls on August 28, 2022.

Tiit Raid, 81, was born in Tartu, Estonia on December 9, 1940, to Eugen and Luule Raid. His family fled their occupied country during WWII and eventually settled in Minnesota in 1949. Tiit started second grade with no English skills. He never forgot what it was like to be an outsider.

Tiit and his younger brother, Peep, were stellar athletes who ran track and played football and basketball for Prior Lake High.

Tiit fell in love twice: as a fifth grader with art and as a young man with Ann Swanson. They celebrated 55 years of marriage in August.

He earned a BFA and MFA at the University of Minnesota. From 1967 to 2002, Tiit was a beloved art professor at UWEC. He taught thousands of students the difference between looking and seeing, which enriched both their art and their lives. He influenced and mentored countless graduates.

Until his recent illness, Tiit painted every day. The past two decades his work was influenced by the perfect designs found in nature. Tiit’s paintings are hanging in many collections in the US and abroad.

He showed his work in galleries in Fall Creek and Eau Claire to as far away as Boston, New York City, Toronto, Stockholm, and Talinn, Estonia. Just before he died, he selected paintings for his last show, a retrospective of his work from 1949 to 2022, to be held at the Pablo Center in 2023.

Tiit became interested in the relationship between art and music in graduate school and eventually he discovered his natural sense of rhythm. As a percussionist, he could turn just about any surface into a drum set. He played with the Pay Toilet South Hampton Strutters, Robert Johnson, Peter Phippen, Rick Silloway and many other bands.

Tiit loved a roaring bonfire and a cold beer. He golfed often and worked at perfecting his game each time. Tiit travelled throughout the world and shared many adventures with his wife and friends. He could talk to anyone, and he always made strangers feel welcome. He never lost his ability to sit and look.

For 43 years Tiit and Ann’s home base was Fall Creek. They moved to Eau Claire in 2017. Tiit spent his final days in his home studio surrounded by the people and objects he loved.

He is survived by his wife, Ann, brother Peep’s wife Leslie Zimmerman and her children Kaia Raid and Keedan (Martha) Raid and their two children; sisters-in-law Arlene Kreller, Aimee (Kenneth) Struffert; brothers-in-law Duwayne Johnson, Dean Sanderson, and many Swanson-side nieces and nephews; cousins in Estonia and countless friends throughout the world. Tiit will be dearly missed.

At Tiit’s request, there will be no formal memorial or funeral; stay tuned on a future party to celebrate Tiit’s full life.

Please: no flowers. Tiit would appreciate a donation in his name to the Pablo Center at the Confluence or, in his memory, take time to really see the landscape and the people around you.