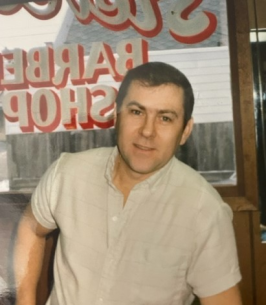 Steve was born in Black River Falls, WI to Gaylord and Dorothy (Barrett) Casper and graduated from Lincoln High School in Alma Center. He loved to wrestle in High school.

He married Carole Gjerseth September 24th, 1966 at the Alma Center Methodist Church. They were later divorced in 1997. Steve graduated from Rockford Barber College in 1968 and owned Steve’s Barber Shop in Janesville, WI. He later moved to Merrillan, WI where he continued to barber.

Steve will be remembered for his wonderful sense of humor and mischievous smile. He could tell the best jokes and loved telling them to everyone. He was a hunting enthusiast and loved hunting with his kids, then his grandkids. Steve really enjoyed sitting outside on the porch with Kathie watching wildlife. He also loved all the reruns of Gunsmoke. He told all of his kids that he had a good life and he left us with so many wonderful memories.

We will have a celebration of life in Merrillan, WI and Janesville, WI.