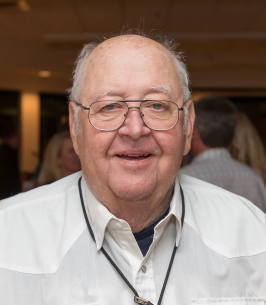 He was born on February 1, 1935 in Waukegan, IL to Anton and Josephine Grum. In May 1942, the family moved to a farm in Clark County, WI where Dick lived until adulthood.

Dick graduated from Withee High School in 1953, received a B.S. degree in Business Administration from Northland College in 1960, and a Master of Science from University of Wisconsin-Stout in 1966.
From 1955 to 1957, Dick served in the U.S. Army 1st Infantry Division, and then from 1957 to 1960 with the Wisconsin National Guard’s 724 Engineering Battalion 32nd Infantry Division as a radio communications specialist.

Dick was an educator for 30 years, first as a teacher at North Fond du Lac High School, then at River Valley High School in Spring Green, WI. Dick worked in the Wisconsin Technical College System for 25 years as an educational specialist and administrator. He also taught graduate courses in teacher education at the university level.

During his career, he visited institutions of higher education in Germany, England, Scotland, Austria, Sweden, Norway, Denmark, Switzerland, Yugoslavia, Russia, New Zealand, Australia and Canada, as well as many institutions in the United States.

Dick’s passions were traveling, studying war history, his dogs, and working as a U.S. Park Ranger in the Apostle Islands National Lakeshore on Lake Superior during the summers of 1994-1996.

After his retirement in 1990, Dick taught 55 alive driver training courses for seniors. He also became especially involved as a volunteer at Dane County Humane Society. In 2004, Dick and his canine sidekick Sundance were responsible for starting, collecting and transporting cans for the recycling program which has now earned over $60,000 to help homeless animals. Starting in 2015, Dick gave annual matching gift event sponsorships, making significant impacts toward helping both companion and wild animals.

In 2015, Dick established a scholarship at the University of Wisconsin-Stout for students who graduated from Owen-Withee High School, Greenwood High School, or any high school in Clark County, WI. Over the years, he supported a total of 68 students with $159,500 in scholarship assistance. He attended the annual Stout University Foundation Scholarship Reception where he had the opportunity to meet the students in-person. He appreciated hearing their hopes and dreams for the future; it made him happy to know he was helping them achieve a college degree.

Every fall for 30 years, Dick grew a big white beard so he could be Santa Claus to help raise money for many of his favorite charities.

A Celebration of Life will be held at a later time.