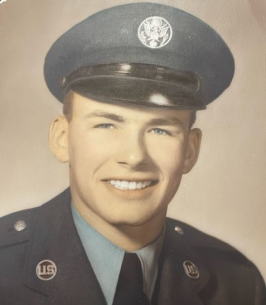 Monroe J. Yule, age 87 of Altoona passed away peacefully on Tuesday, June 14, 2022, after a long and courageous battle with Parkinson’s disease. He was born on July 21, 1934, in Eau Claire to James and Mable Yule.

Growing up Monroe enjoyed hunting, fishing and playing baseball. He graduated from Eau Claire Senior High School in 1952 and enlisted in the United States Air Force that summer. During his years of service Monroe was stationed in Hawaii, Johnston Island and Amarillo, Texas. He was honorably discharged in 1956 with Good Conduct and National Defense Service Medals.

After returning to Eau Claire, he began working at Johnson Printing as an apprentice in 1957 and later that year married Jean Hemenway. Together they had two sons, Randy and Daniel. Monroe continued to work in the graphics arts industry until his retirement in 1994. Upon retirement, Monroe and Jean enjoyed camping in their RV near Gordon, WI. He also enjoyed gardening and playing cards with friends. He was an avid Green Bay Packer and Milwaukee Brewers fan. He had a wonderful sense of humor, memory for jokes and a great way of delivering punch lines. Above all, he was a good family man who loved to cook and care for his family.

Preceding him in death are his parents James and Mable, brother Marlowe Yule and sister Lauray Yule

Monroe will be interred at the Northern Wisconsin Veteran’s Memorial Cemetery in Spooner in a private ceremony with full military honors at a later date.