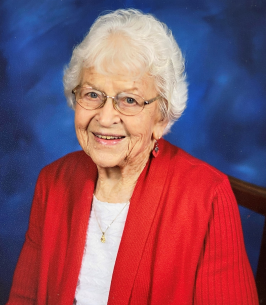 Joyce Avonne Nelson passed away on April 1, 2022 at Prairie Pointe in Eau Claire, WI where she celebrated her 100th birthday on September 23, 2021. She was the second of 9 children born to John and Frances (Gillette) Myrman in Chippewa Falls, WI. She graduated from high school in Chippewa Falls in 1939.

Joyce married Reginald (Reg) Nelson on July 27, 1940 in Clinton, Iowa. After his discharge from the Army at the end of WW2, they moved to Chetek, WI where they raised their children. Joyce kept involved with her church, the Eastern Star, and Joyce’s Fashions, a clothing store she owned and operated for several years. Reg passed away March 21, 1977 and Joyce moved to Eau Claire in 1980.

She is survived by her three daughters: Kristine (Roger) Wiltgen of Lake Hallie, WI, Jane (Arnie) Rongstad of Osseo, WI, Marsha (Geoff) Livingstone of Stuart, FL, and one son, Tom (Gail) Nelson of Rice Lake, WI. She deeply-loved and is survived by 10 grandchildren, two step-grandsons, 32 great-grandchildren, and 7 great-great-grandchildren, as well as many nieces and nephews. Also surviving her are two sisters: Elinor (James) Sells of Chetek, and Barbara (Fred) Demars of Rice Lake, WI; two brothers: Calvin Myrman of Eau Claire, and Todd Myrman of Menomonie, WI; and sister-in-law, Marcie Myrman of Eau Claire.

Our mother’s love for her family and for those around her reached far and is wide. We will cherish the memory of her smile and glowing white hair, and hold close the memories she created with us, her graceful acceptance of growing old, and the extraordinary graciousness she poured out to her family and to so many whose paths she crossed. She was our pillar of strength and courage, and we will forever feel the warmth of her love. Our hearts are heavy with her passing, but we rejoice knowing she is now in the loving arms of Jesus. Our thanks be to God for the gift she was to us.

We would like to thank Joyce’s Prairie Pointe family and St. Croix Hospice; the care and love in your caregiving has been a blessing.

A private family graveside service will be held at a later date.