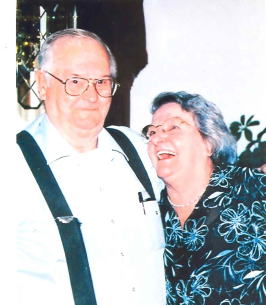 Johanna and Charles are together again!

Johanna Maria Beyreis (née Walter) was the youngest of six girls born to: Susanna and Karl Walter. She was born in FFM-HOECHST (Frankfurt), Germany prior to WWII.

During her school years, she learned Oxford English and was very proficient at it. She was 16 years old where she started translating for the German/American troops and worked as a switchboard operator at Rhein-Main Air Force Base in Germany. During the Berlin Airlift, she met and married the love of her life, her American Air Force husband Charles. During Charles’ military career, they lived in Germany, Spain, California and Oklahoma and then Wisconsin after retirement in 1968.

She was an excellent cook, a talented seamstress, very creative with her knitting and crocheting. Many will remember that she crocheted shawls for numerous residents at Heritage Manor in Rice Lake during the years of 2013-2017. She also gave shawls to friends, family and acquaintances. She always had to have her hands busy and was constantly crafting and gifting ornaments, tissue holders, seasonal and holiday decorations, kitchen knick-knacks, Afghans and making pretty much all her clothes and outfits for her children. Johanna wanted a career as a tailor however, the instructors in Germany insisted that she be a teacher. She excelled at Special Education - after Chuck retired from military service, and during the times that they lived in Wisconsin and Colorado.

Johanna was so very proud of her children and was always there (in the stands) to cheer them on at ballgames and events. As a Den Mother, Brownies, and Girl Scout leader, she would transport them and their friends to numerous school functions, outings, camping trips, fairs, and competitions. During NFL football season, she was also a proud and loud Packer fan.

Charles and Johanna loved to travel during their retirement. They would spend the winter months in Del Rio, Texas along with other snowbirds. During the summer, they would head north and find various campgrounds to park their motor home. They enjoyed meeting old and new friends and constantly adding to this list those they encountered along the way.

Johanna and Charles were the first to volunteer to help when a natural disaster or crisis occurred, regardless of where they were living at the time.

Interment will be at the Northern Wisconsin Veterans Memorial Cemetery in Spooner, WI. On May 9, 2022 at 1:00pm.