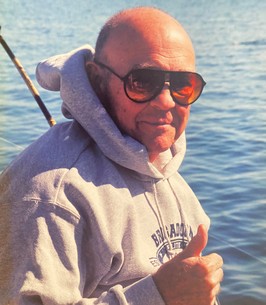 His family moved to Arcola, Illinois where Jim grew up and graduated from high school.
He spent 2 years at Eureka College and 4 years in the United States Navy during the Korean War. After discharge he returned to Illinois, and enrolled at the University of Illinois where he earned 2 degrees.
In 1959, he moved to Cumberland, Wisconsin, where he taught Junior High School for 30 years. He owned several businesses during his career, the most notable one being Camp Brigadoon, a seasonal summer campground on Beaver Dam Lake.

He was preceded in death by his first wife, Dorothy King, his two sons Steven King and David King, and a brother Ken King.
Jim loved fishing and gardening, and he truly lived his dream life.

A celebration of life to be held at the First Lutheran Church in Cumberland, Wisconsin on Thursday, March 31st. Visitation to be from 12pm to 2pm, and the service at 2pm. In lieu of flowers, please donate to the Cumberland Area Community Food Pantry or Cumberland Education Foundation.