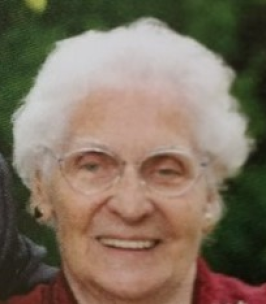 Iona was born Feb. 7, 1926 to Erwin and Esther Escher in Britt, Iowa. The family moved to the Chippewa/Jim Falls area when Iona was young. They later moved to Cornell where Iona graduated high school.

After high school, Iona worked at the Dime Store and Farmers Union in Chippewa Falls. Then she moved to Memphis, TN and lived with her sister and husband and worked at the Army Depot. Iona then came back to the Cornell area and worked in the office at the Paper Mill.

In November of 1946 she was united in marriage to Carl Guthman Jr. Together they raised 5 children. They were married for 74 years and 10 months. Iona and Carl farmed for many years. For 10 years, they owned and operated Guthman’s Store and Tavern by Holcombe. In 1974, they moved to Sheldon. Iona then worked as a cook for the Village Inn for 15 years. They later retired and moved to the Bruce area.

Iona always had a big garden and canned lots of the produce. She enjoyed quilting, crocheting & playing cards with family and friends. Family was very important to her and were always welcomed. Iona will be very sadly missed by all.
Iona is survived by her 4 sons; Wayne (Kathy), Larry (Cheryl), Al (Dee) and Rick (Kriss); her daughter Carla (Steve) Crabb; 14 grandchildren, 28 great grandchildren, three great-great grandchildren; and one brother Kenneth.

She was proceeded in death by her parents; her husband Carl; her sister Dorothy; and brothers William & Ronald.

A family celebration of life will be held at a later date.