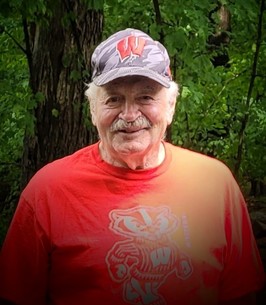 Ervin Clarence Hackel, 83, of Fall Creek, WI, passed away peacefully on August 5, 2022, at
Dove Healthcare-West, Eau Claire, WI, with his family by his side.

Ervin was born on January 16, 1939, in Milan, WI, to William and Helen (Bischoff) Hackel.
Growing up on a dairy farm in Colby, WI, the eighth child in a family of 14, he learned
responsibility and strong work ethics. At a young age he endured the life of a grown man from
threshing in the fields to milking cows by hand. He worked hard and was expected to work
harder. Even through all the hardships, he kept a smile on his face and earned the nickname
Sunny.

Growing up, Ervin had various jobs working at the local feed mill, butcher shop, and on
neighboring farms. After graduating from Colby High School in 1958, Erv lived with his sister,
Marilyn, in Milwaukee, WI, where he worked at a manufacturing company. Driving 100 mph on
the dirt roads from Milwaukee, he settled back down in Colby, WI. He started his own dairy farm and raised hogs partnering with his brother, Ronald, and later on brother-in-law, Dale Apfelbeck.

During this time, he enlisted in the Army National Guard in 1958. Ervin earned the title Corporal
with marksman and sharpshooter military qualifications; he was honorably discharged in 1962.
After a barn fire in 1967, he traveled the country visiting family and friends. Erv stopped in
Arizona and was a herdsman of a large dairy farm for a month. He and the owners stayed in
touch for many years thereafter. Upon returning home, Erv rebuilt and modernized his farm into
a freestall barn and milking parlor with additional heifer and calving facilities.

In June 1974, Ervin married Loretta Gumz; they later divorced. The couple had three children; it
was no surprise to Erv he was going to have two boys and one girl…he just "knew".

As a single father, Erv continued to farm in Colby. On January 1, 1989, he started a new
adventure on a small dairy farm in Fall Creek, WI. While farming, he watched his children grow
up and graduate from high school. In 2004, at age 65, Ervin sold the dairy herd. He cash
cropped corn and soybeans for nearly twenty years, up until his final days. Living on a farm, a
person is not just a farmer; Ervin was a testament to that truth. He was eager to take on the
roles of welder, builder, plumber, electrician, AI breeder, vet, landscaper, lumberjack, etc. Erv
was always willing to lend a helping hand whenever needed.

The past ten years, Ervin provided skid steer work and drove for Amish families in Augusta, WI.
He drove his diesel truck numerous miles with trailers in tow. He was known to offer farming
advice and also told a joke or two. He built close relationships and was respected by many. With
the passing of Ervin, the Amish community not only lost a reliable driver, but also a dear friend.

When he wasn't working, he enjoyed summer fishing, ice fishing, deer hunting, playing Black
Jack at the casino, playing card games, watching the Packers, eating Friday fish fry, and visiting
with family and friends. Erv always had a twinkle in his eye and a joke around the corner.

The past 30 years, fishing trips to Canada were always in Erv's annual planning. These trips
entailed remote fly-ins north of Ear Falls, Ontario, to the Wenasaga Outpost. Walleye and
northern pike were plentiful on Jubilee and Slate Lakes. Thanks to fellow fishermen Larry,
Roger, Ron, Mark, Sam, and Lyman for a lifetime of fishing stories. Special thanks to Mark and
Larry for trekking three miles to flag down help in the time of need. Extra special thanks to Larry
for bringing our dad back home to us.

The family would like to thank Mayo Clinic Health System, Eau Claire and Osseo, for the care
their father received the past two months. Thanks to St. Croix Hospice and Dove Healthcare-
West, for supporting Erv during his final days.

Heartfelt thanks extended to the many neighbors and friends who enhanced Ervin’s life
throughout the years.