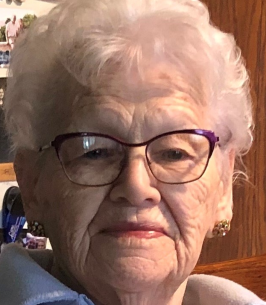 Elaine Pszeniczny, age 88, passed away peacefully on Tuesday, March 22, 2022 at home, surrounded by her family.

Elaine was born on April 12, 1933 in Thorp, Wisconsin to Lottie and Michael Lukasiewicz. She attended Blueberry Country School in the township of Thorp. She married Raymond F. Pszeniczny on October 6, 1956. Elaine and Raymond shared most of their life on their cherished Reseburg farm where she proudly raised their family of six children. Later, they moved in town where Elaine became an active member of the Thorp community.

When she wasn’t dancing with her husband, Raymond, in the Polish Krakowiak Dance Group or traveling with family and friends, she dedicated her time to the PCCW of St. Bernard’s-St. Hedwig’s Church, volunteered for the Thorp American Legion, American Red Cross blood drives, and as a poll worker during local town elections. She enjoyed her involvement in many groups including the Sterling Homemakers Club and local Red Hat’s Society. Elaine’s love of cooking, baking, and gardening touched the lives of all who were fortunate enough to taste the dishes that were seasoned with her Polish heritage.