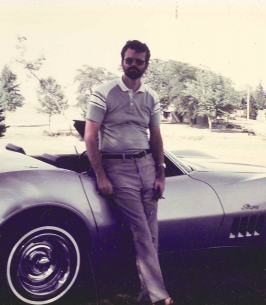 Memories are what we treasure of David Ponick, a true gentleman and a scholar. Multiple Myeloma cancer took his life on April 25, 2022; but not his legacy of truth and caring and respect.

David was born in Stanley, Wisconsin, the only son of Tony and Theresa Ponick. His family moved to Eau Claire where he graduated from Memorial High School and he went on to earn degrees at UW-Eau Claire. David obtained his PhD in mathematics and statistics from the University of Minnesota. He taught mathematics for 35 years in the university system and retired as a Full Professor from the UW-Eau Claire Department of Mathematics.

Teaching defined the heart and soul of who David was. His greatest joy was sharing with others -both inside and outside of the classroom – the knowledge he had captured. On the university campus David was a pioneer in the use and application of microcomputers. He conducted many professional workshops and seminars throughout the Midwest. Committed to the importance of mathematics, David also participated in the Wisconsin Mathematics Council and served as an officer on its Board for several years.
Throughout his career in education, students and peers attested to his gift for teaching and opening new doors to learning. Even years after his retirement due to health, David continued to receive correspondence from former students in gratitude for the inspiration and influence he had on their futures: a touching testimony to the profession he so dearly loved.

David’s life was motivated by an intense curiosity and zest for learning which took him on paths both varied and rewarding: photography, classic cars, construction, the movies of Stan Laurel and Oliver Hardy, and good music.

His reverence for Nature is reflected in his photographs of his beloved Miniature Schnauzers: Lady Bug, Gabby Hayes, and Gabby Hayes Too as well as the numerous wildlife forest creatures who roamed the acreage surrounding his home. Many of David’s photos were published in various news media including a township website.

David also had an avid interest in classic cars. His cherished 1956 Thunderbird was the subject of a pivotal article he authored for The Early Bird magazine, an international classic T-Bird publication; and the car was featured on the cover. A memorable classic car find for David was a rare 1961 Export Corvette stored for years in a chicken coop at Lake Wissota. Of the Corvettes David owned, this was his prize in that, after research, provenance provided by the original owners’ family in Munich, Germany, and restoration, it won the coveted Bloomington Gold Award, a rare position in the Special Corvette Collection Show, and the prestigious Corvette Hall of Fame standing. It, too, was featured with David’s accompanying article on The Corvette Restorer magazine cover.

Humor was an essential element in David’s life. He had the gift of a quick wit to ease the day or the situation. That appreciation of seeing life through the lens of levity lead David to purchase, research, and catalog the works of Stan Laurel and Oliver Hardy, prominent comedians of the 1920’s. His collection of Laurel and Hardy memorabilia was prized by fans of Stan and Ollie; and, notably, described as the largest Laurel and Hardy collection compiled. David donated The Ponick Laurel and Hardy Collection to the Elmer L. Andersen Library at the University of Minnesota where it resides in the Archive and Special Collections for others to appreciate.

David’s creativity was also expressed through his love of construction. Over the years he was an integral part of the design and construction of four homes he built and a cottage. The quality of his workmanship was reflected in special touches like stained glass panels he made, elegant archways, and unique wall texture. Not only the process but the perfection of the final product were important to David.

Truth and fairness defined David and The Golden Rule was his guide. He was a man of high moral and ethical standards who could be relied upon to be fair and just, and to be there when needed…traits he attributed to his days as an altar boy at St Anne’s Church in Stanley.

Music was important to David throughout his life. He felt it spoke to the good times in life, the bad times in life, and those times when it touched his soul. One of his favorite songs was Jimmy Buffet’s “He Went to Paris” in that the lyric described David’s life: “Some of it is magic and some of it is tragic But I had a Good Life all of the way.”

David is survived by his wife of 58 years, Minette. He was preceded in death by his parents, Tony and Theresa Ponick and his sisters, Paulette Ponick Seyberth and Beverlie Ponick Sather.

Visitation will be held at the Stokes, Prock and Mundt Funeral Chapel, 535 S. Hillcrest Parkway on Tuesday, May 10, 2022 from 3:00 p.m. until 6:00 p.m. Private interment at Rest Haven Cemetery will occur at a later date.