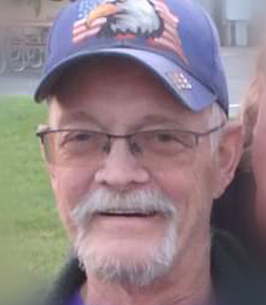 He was born on April 13, 1948 in Grosse Pointe Farms, MI with his fraternal twin Carl “Chuck” to Broadus “Pete” and Alpha Girtman. He graduated from Mondovi High School in 1966 and immediately enlisted in the Air Force.

After his service, he returned back to his home area and worked a few different jobs before landing a job at the Presto factory, and then moving on to working at the Pope and Talbot paper mill in Eau Claire.

David married Marsha Schorbahn on September 29, 1973. They settled in Strum and they raised their daughters Alexis (Stephen) Kunich and Leah (Robin) Warden.

David worked at the Eau Claire paper mill for 36 years, 8 months (not that anyone was counting) and he was active in numerous clubs and organizations including the Strum Rod and Gun and the Associated Land Conservation club in various roles, the Hopland-Moen American Legion Post 459 as their current Chaplain, and Hunter’s Safety as a teacher. He was also a constant figure in the Strum-Unity Fire Department and with the First Responders. When he retired, he filled his extra free time by volunteering to drive veterans down to the VA in Tomah and also driving for local vehicle dealerships transporting vehicles, as well as driving for Brown and Hart Truck & Auto in Pleasantville. There may have been a few fishing trips thrown in as well.

David loved sharing his passion of the outdoors with anyone that showed an interest, whether you were related to him or not. He loved meeting new people, reconnecting with old friends, and spoiling any and all dogs that met him.
He is survived by his wife Marsha; daughters Alexis (Stephen) Kunich and Leah (Robin) Warden; granddaughter Amber Kunich; brothers Chuck Girtman (Deby Deutchser) and John (Debbie) Girtman; sisters Ellen Holstad and Sara (Tom) Kensmoe; as well as other relatives and friends.

He is preceded in death by his parents Broadus “Pete” and Alpha Girtman.

Cremation Society of Wisconsin, Altoona, is assisting the family with the final arrangements. Visitation will be Friday, April 29th from 4p-7p at Grace Lutheran Church in Pleasantville, WI. Funeral services will be Saturday, April 30th at 1pm with visitation 1 hour prior, also at Grace Lutheran Church. A Celebration of Life will follow at the Hopland-Moen American Legion Hall in Eleva, WI. These details will be posted on their website (https://www.cremationsociety-wi.com) and in local newspapers.