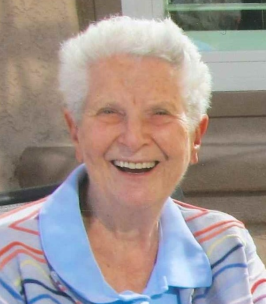 Anina Louise Bearrood, of Altoona, Wisconsin, passed away at the age of 82 on
Sunday, June 5, 2022 at The Classic at Hillcrest Greens memory care facility in
Altoona.

Anina was born September 10, 1939 to Victor Raddant and Helen (Hotz) Raddant
in Greenbelt, Maryland. Her parents lived in the Washington, DC area where her
father worked for the United States Department of Agriculture.

In 1940, her parents moved to Ladysmith, Wisconsin so her father could manage
the Hotz Cranberry Bog in Hawkins, Wisconsin – one of the Hotz family
businesses. This is where Anina grew up and attended school, graduating from
Ladysmith High School in 1957.

During her high school years, Anina was active in the music programs and played
clarinet in the school band. Anina learned to play the organ, including playing the
organ at the Methodist church while still in high school.

Anina, her younger brother Bob, and her parents enjoyed living in a small town
and the family had many friends. Anina’s close friends included Barb, Diane,
Carol, Ginny and others. There was also time with relatives and Anina enjoyed
being with her cousins, including summer visits to Shawano Lake.

Following high school, Anina attended Ripon College in Wisconsin for two years
before transferring to the University of Wisconsin in Madison to pursue an
Accounting Degree. At Ripon College, Anina joined Pi Tau Pi Sorority. Over the
years there have been many reunions with her sorority sisters. Anina graduated
from the University of Wisconsin in 1961 with a BBA Degree in Accounting.
While at UW-Madison she met her future husband, Sheldon Bearrood, who was
also in the Business School. While waiting for her fiancé to graduate, Anina
worked one year for Employers Mutual in Wausau, Wisconsin. On August 25,
1962 Sheldon & Anina were married at the Methodist Church in Ladysmith,
Wisconsin.

They began their married life in the San Francisco Bay Area where Sheldon
worked for Fibreboard Paper. In 1963, shortly after the birth of their son Douglas,
Sheldon was transferred to Stockton, California where they purchased their first
home. During their California years, Anina worked for Manpower doing
temporary office jobs.

In 1966 they moved to Minnesota to raise their family, building a home in the
Twin Cities suburb of Shoreview. In 1967 their second son, Robert, was born in St
Paul, Minnesota. Anina worked for the State of Minnesota Dept. of Labor &
Industry for over 30 years, retiring as Director of Accounting.

During their working years Anina and Sheldon lived in Shoreview and enjoyed
many fun times with their friendly neighbors. Anina belonged to Homemakers, a
neighborhood group of ladies, and she would walk mornings with neighbors before
driving to work. Anina worked full time in addition to being a full-time mother,
often going to bed at midnight. She was a very talented homemaker, preparing
wonderful meals and even sewed clothes for her sons when they were young. She
also knit several sweaters for family and friends. Anina enjoyed various crafts,
learning hardanger embroidery, rosemaling and cross stitch. She was an avid
reader and enjoyed jigsaw puzzles, including some 5,000 piece puzzles.
Family was very important to Anina and Sheldon and they followed their kids
sports and attended school concerts at the Roseville schools. A favorite winter
activity was downhill ski trips to Minnesota, Wisconsin and Upper Michigan.
The family enjoyed several driving vacations throughout the United States and
Canada.

In 1997 Anina and Sheldon retired and moved to the Ozarks of NW Arkansas.
They built their dream home on a lake in Bella Vista. They were active in
Highlands Methodist Church and served on committees and participated in church
social events. Golf was a big part of their life in Bella Vista with its 6 golf courses.
They made many friends. Summer brought visits from their son’s families for a
week with Grandma and Grandpa, always enjoying the lake and Grandma’s boat.
Grandma and Grandpa were blessed with 5 grandchildren – Thomas, Anna,
Lauren, Elise and Jack.

After investigating Florida, Gulf Coast and Arizona the decision was made in 2004
to build a winter home in Sun City Grand in Surprise, Arizona. Sun City Grand’s
4 golf courses allowed Anina and Sheldon to enjoy their golf passion year around.
They were, once again, blessed with friendly and supportive neighbors.

In 2018 Anina and Sheldon moved to Wisconsin to be closer to their children.
With the help of their son, Robert, they built a new home in Altoona, Wisconsin.
They were able to continue enjoying their Arizona winter home until 2022.

In 2018, Anina was diagnosed with Macular Degeneration. That meant she was no
longer able to read or do jigsaw puzzles. Instead, she began to knit prayer shawls
and donated over 100 to churches and nursing homes in Wisconsin and Arizona.
In the summer of 2019, tests performed by Mayo Clinic of Eau Claire indicated
that Anina had a small tumor in her bile duct (Cholangiocarcinoma). By early
2022 the cancer had spread throughout her body and she was unable to walk and
needed help with her daily activities.

April 6, 2022 Anina was admitted to The Classic memory care facility in Altoona,
where she received wonderful care including assistance with daily activities.

During her two months at the memory care facility, Anina was comforted by many
visits from her family. The family would like to thank The Classic staff and the
Mayo Clinic Hospice Team for their compassionate care.

Anina is survived by her husband of 59 years, Sheldon, and her two sons, Douglas
(Teresa) Bearrood of Woodbury, Minnesota and Robert (Cathleen) Bearrood of
Eau Claire. Also surviving are her grandchildren Thomas Bearrood, Anna (Kyle)
Widman, Lauren (John) Thurner, Elise Bearrood and Jack Bearrood. She is also
survived by her brother, Robert (Katherine) Raddant of Camillus, New York as
well as many cousins, nieces and nephews.

Memorials in Anina’s name are suggested for the American Cancer Society,
Alzheimer’s Association, Chapel Heights Methodist Church Food Pantry or to a
cause of donor’s choice.

A “Celebration of Life” service will be at 12:00 noon on Saturday, July 9, 2022 at
Chapel Heights Methodist Church in Eau Claire, Wisconsin at 300 E. Hamilton
Avenue. There will be a visitation one hour prior to the service at the church.